To GMO or Not to GMO?

There is a lot of chatter recently about Genetically Modified Organisms, or more commonly termed GMO’s lurking in our food system. Genetically modified (GM) foods are foods derived from organisms whose genetic material (DNA) has been modified in a way that does not occur naturally. Foods are modified for many reasons including: herbicide resistance, nutrient value, virus resistance and increased yield. There are some big questions about GMO and many have still gone unanswered. Are they safe? Is GMO healthy? Why do we need them? How will they affect our ecosystem? Will they provide us with relief to hunger? Should food packages be labeled for them?

Experts cite many pros and cons to GM foods. They have shown to be a valuable tool in helping large and small scale farmers produce more crops more efficiently, therefore making food more affordable. On the other hand, GM crops lead to reduced biodiversity and can impact soil microbes. In addition to herbicide resistance, GM crops increase the presence of weeds resulting in an agriculture system that relies heavily on multiple herbicide agents. In regards to safety, many scientist claim GM crops currently being used to be safe. However, admit that more research is needed and that GM crop safety should be determined on a case by case basis as each crop is modified in an entirely different way. For example, crops modified to be resistant to herbicides allow farmers to use chemicals to kill weeds but not the crop while other crops like papaya in Hawaii are modified to be resistant to a virus known to devastate papaya farms.

Some experts chide consumers for being outraged by GMO technically in the use of crops while GMO technology has proven invaluable in the development of live saving medications. Despite assurance of experts and government bodies consumers demand labeling of GMO ingredients of food packages. Recently Vermont passed legislation requiring labeling of GMO in foods. In response a federal labeling law was passed nullifying

Vermont’s stricter legislation entirely. The fear of varying laws passing from state to state prompted a federal bill to pass quickly, leaving fine details of the labeling law up to the USDA. The federal GMO labeling law gives producers options for labeling such as: symbols, wording, a phone number to call with product information or QR code that can be scanned to lead consumers to information. It is likely we won’t see final detail for some time and the law won’t come into effect for another two years.

As a Registered Dietitian, I do not think that GM crops should be eradicated from the food system but I do think they could be used more responsibly. Farmers have relied on GMO’s and government subsidies to grow large quantities of sugar beets, corn, and soy to produce cheap heavily processed or packaged foods. Organic or more sustainable farming practices and a shift of subsidies to other crops could lessen our dependence on GMO’s and potentially make healthier whole foods more affordable. Whether you are worried about environmental or health concerns, you deserve to know what is in your food if you desire that information. I do fear that labeling could leave people to think that foods labeled GMO free means that it is healthy. We should be focusing more on whole foods and more fruits and vegetables not trying to find GMO free cookies and macaroni and cheese. Purchasing organic produce is a great way to ensure your avoiding GM crops and supporting more sustainable farming practices. The bottom line is the consumer (that’s us!) does influence what is on and in a package. Regardless of GMO or organic status, replacing processed foods in your diet with produce improves your health and our environment! 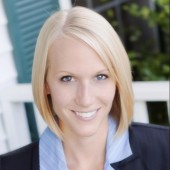 Kristin Pressnell, RD, LDN is a clinical Dietitian with DaVita where she provides nutrition counseling to patients with kidney disease. She also mentors other Dietitians on skills and strategies to counsel their own patients.

More than Leaves Fall in Autumn: The Native Persimmon

Put Pumpkin Back Into Autumn