Stop frowning. I’m serious. I didn’t even realize this could be a “Let’s Make a Meal Together” craft until I began the process. I belong to a Produce and Meat CSA from a local Nashville farm and winter is always a little challenging in the produce department. I received a bag of beautiful sweet potatoes last Saturday and the inspiration hit: sweet potato gnocchi.

It’s SO easy and turns out, a super fun meal project with the kids. It’s like playing with Play Dough. I let my son do ALL the rolling out of the dough into ropes with his hand. (Well, except this one for the picture - that’s me.) Then I just cut them and we both tried to make those cute indentations with forks, but they ended up being so ugly that we donned them Frankengnocchi. As soon as I cooked them, however, they puffed right up and no one was the wiser to their previous hideous appearance. (Well, except you now.) You could Google how to do this nicely, but I was too impatient and, besides, we had fun making them ugly. Mine were the ugliest so, clearly, I won.

After boiling and draining these not-so-beautiful-but-delicious nuggets, I threw them into a large skillet to finish them off with a sauce. What to do for a sauce? Honestly, I just mixed some butter, olive oil, vegetable broth and balsamic vinegar together and called it a day. You don’t really want to hide your hard work by putting a super heavy sauce on them. I also had some leftover chicken sausage that I needed to use up in addition to broccoli so threw that all together and topped it with grated pecorino. Want to do a meatless meal? These little guys are perfect for that! I would toast up my favorite nuts (pecans or walnuts would be great), crumble a little goat cheese and sprinkle some fresh herbs at the end. Squeeze some lemon or a sour orange and you’re in business. 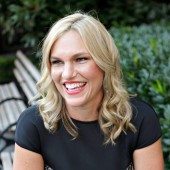 Jen McNabb is a Mom, Systems Consultant, Cooking Contest Enthusiast, Awful Housecleaner and self-proclaimed Dinner Revolutionary. Recently a winner for her 101 Sauce on Lifetime’s Supermarket Superstar, Jen is working on instilling confidence in the kitchen to moms while trying to get 101 Sauce to market. Jen grew up in both Orange County, CA and Brentwood, TN. She never wants to leave the Nashville area unless she gets a ticket to Italy for a cooking contest win.

Back-To-School and Back To Healthful Lunches & Snacks

Reduce Food Waste: Save Our Planet and Your Money

To GMO or Not to GMO?